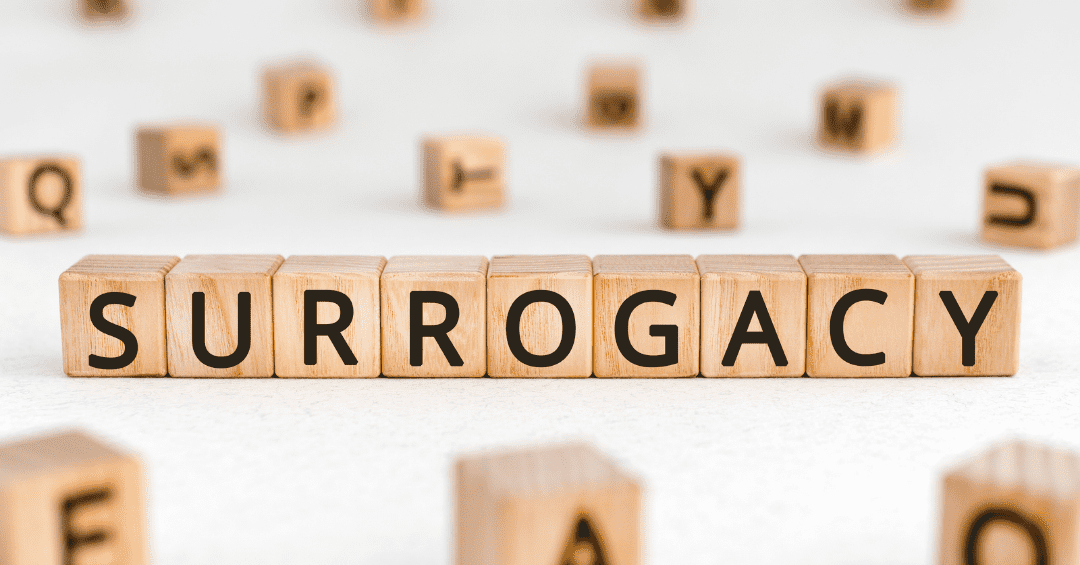 Most people are absolutely wonderful and very supportive when we say we had a baby via surrogacy. Others react with judgement and suspicion.

Surrogacy is something that everyone has an opinion on!

Dear friends, neighbours, colleagues & fellow parents (it still feels strange saying that last part!). My husband and I have a newborn, but I was in my size ten jeans all the way through the birth. No morning sickness and no bump, but I carried her out of the hospital and took her home with me.

This has already confused the hell out of some people, and that’s OK because it doesn’t have to make sense to anyone apart from us. It’s pretty simple though, and it’s really not like it is in the movies. This doesn’t stop some of you from putting two and two together to make twenty-seven – or in other words, I think sometimes people’s imagination runs away with them when they hear the word “surrogacy”.

The correct term for “surrogate” or “surrogate mother” is  “gestational carrier”. However, absolutely nobody seems to know what that means, and I just get blank stares from people when I say that. So I’m saying “surrogate” here, even though I know that’s a bit old-fashioned.

Most people are absolutely wonderful and very supportive when we say we had a baby via surrogacy. Others occasionally react with judgement and suspicion, to our faces and behind our backs too – and jaw-droppingly inappropriate and silly questions and statements. I’m going to attempt to answer some of that stuff here! Don’t let it put you off though if you want to do this, because it’s the best thing we’ve ever done.

Surrogacy questions – is it ever ok to ask about it?

I really don’t mind people asking questions if they’re genuinely curious. I can only speak for myself, but I’m sure most parents in our position are happy to talk about it as long as you’re not being weird. My neighbour’s little girl was listening to me and her mum talking about it, and she said “Will the baby know you’re its mum when it comes out of the lady’s tummy?” and her Mum gave her a stern glare for being nosy. I thought that was an excellent question though. If only some adults could focus on what’s really important – the baby’s wellbeing and the bond between us. I told her yes the baby would know because there are many different types of mummy, and as long as they love the baby and promise to take care of it, then they’re all equal, and they all get to be called Mummy.

“So, how much did you have to pay her then?”

This is such a rude question! Unless you’re seriously thinking of doing this yourself & need to get an idea of the cost – mind your own bloody business! It’s amazing how many people have just bluntly asked us this.

Sometimes people ask this because in their head the baby is being coldly bought or sold, without concern for the welfare of the child or the surrogate. They want to know how much money you would have to “throw at a woman” to get her to give up her child, or what price some wicked women will sell their child to absolutely anybody for. This is completely the wrong end of the stick!

Some people can’t make sense of anything unless it has a price tag on it, which is very sad. They also can’t fathom doing something so amazing for another person, simply because it’s a wonderful thing to do, which is also fairly tragic if you ask me.

Surrogates are basically unicorns – rare and magical beings who appear in your life just when you’re ready to give up and fall into a pit of despair, and they make your most precious dreams come true. All you do in the UK is pay them reasonable expenses while they are pregnant. Frankly, when they are growing your baby, you want them safely sitting around with their feet up eating organic grapes, not working shifts to pay the mortgage. And it’s the absolute bloody least you can do, under the circumstances.

Because it’s difficult to find a surrogate, and it’s a complex thing to arrange properly, most people use a professional agency. They help to handle everything and ensure that you’re a good match and that everyone is supported through the whole process. That costs money, and it’s worth every penny in my opinion.

And in my opinion, I would suggest looking into these great agencies and charities when doing your research on surrogacy

“Stretchmarks and morning sickness are the worst, you’re lucky you don’t have to go through that!”

Urgh. We spent five years and thousands of pounds trying to get pregnant. My husband had to stick a big needle in my stomach a whole bunch of times, and even that didn’t work. I had a miscarriage too, which I won’t get into here, but it was flipping awful. I would absolutely love to have stretch marks and morning sickness. I’d proudly flaunt my tiger-striped belly on the beach if I had marks to remind me of my beautiful bump. Swollen ankles and eating coal too, I’ll take the lot!

I am lucky to have my wonderful surrogate, who gave me this priceless gift – but if you could see my IVF bill and the bruises it gave me, you might reconsider who’s really the lucky one here.

“Is she actually your baby then?”

This can mean absolutely anything, depending on who’s asking. I’m always tempted to say no, I just found her on a bus. Or no, we just borrow her on the weekend like a sort of timeshare arrangement. The sensible answer though – yes, she is my baby. Now, what do you actually mean?

Genetically? No, but she is my husband’s daughter. Also, does it matter? Because it doesn’t matter to me.

Legally? Yes, I am her legal parent. There were lots of forms.

Morally? Yes, the surrogate agreed to carry her for me, and she stands by her decision.

Spiritually? I don’t know what God thinks of the whole deal, I didn’t ask Him.

Let me help you out with this one. I think what you mean is how did the sperm and the egg become an embryo that grew inside the surrogate’s womb?

No? Oh! You want to know if my husband had to have sex with the surrogate, or if we used a turkey baster? Honestly, some people’s imaginations are wild. Let me quickly explain, so you can run off and gossip about it:

The embryo was placed into the womb of the gestational carrier by a doctor on a wet Wednesday afternoon, in a clinic just off the M6. Sorry to disappoint you, but there was nothing remotely kinky about it.

“I couldn’t do it. I couldn’t take a baby off a woman like that, it’s inhumane!”

This was said about me rather than to me. It was said by someone who does tend to say dramatic stuff, so I wasn’t that surprised. However, just in case anyone else thinks that I’ve suddenly turned into Serena Joy from the Handmaid’s Tale, let’s just clear this up:

My surrogate, because she is an amazing human being, to whom I will be forever grateful – voluntarily carried our baby – mine and my husband’s. We all created this baby – my husband, the donor whose eggs we used, the doctors, me, and the surrogate herself; we are all a part of the creation of this life. However, this is something that is happening for us. The baby is intended to be our child. Everyone is fine with that. Everyone has consented to this. Everyone is happy with it. Nobody is being forced or bribed or made to wear a red dress and talk about fruit.

“What if she changes her mind?”

We got asked this before the birth. Surrogates changing their mind is the plot of a few books and movies, and people think that this must happen all the time. People also think that the way you get a surrogate is to pressure some vulnerable young girl into going through with it when she doesn’t really know what she’s getting herself into. Who needs money to escape from a life of crime or something. That’s not actually how it’s done, thank goodness.

The scary thing is – she could actually have done that if she wanted to. In the UK if you give birth to a baby, you’re legally the baby’s parent. My husband is also legally the baby’s parent because we used his sperm. I am not. This means that she could have changed her mind, and I wouldn’t have been able to do a thing about it. We’d have had to co-parent with her, which would be incredibly awful after the build-up to the birth, and would probably have given me a nervous breakdown after all of the stress we’d had already. But we’d have had to make it work.

I think what people really mean sometimes though, is that they don’t approve of all this surrogacy stuff, because it seems a bit weird and immoral to them. They think – serves you right if she does turn around and keep it. That’ll teach you to go around impregnating innocent girls who owe money to the mafia! Like I said, people’s imaginations are wild.

PrevPreviousRebel Wilson is your PCOS BFF on Instagram
Next7 things you should never put up your vagina – and 7 things to go town with!Next