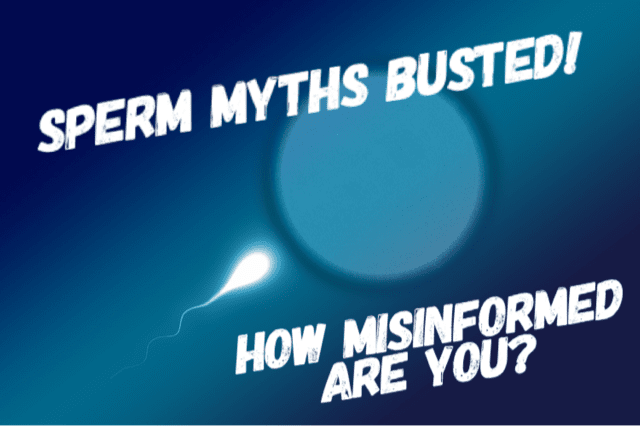 Sperm myths busted! How misinformed are you?

There are a lot of myths about men’s fertility, especially around sperm and the male reproductive system. We’re going to bust some of these myths for you! Male factor infertility accounts for around half of infertility cases in couples, so it’s important to separate fact from fiction.

Myth – sperm dies shortly after it is produced

This is partially true, but it’s not the whole story. Once the semen is out of the penis, sperm lasts for a maximum of a few minutes on surfaces. Extreme temperatures will kill sperm fairly quickly. However, inside of the body it’s a different story.

Sperm can last up to five days inside the vagina. This is because women can not get pregnant every day of their cycle, and are only fertile during ovulation. Even if a woman is not ovulating when she has unprotected sex, it’s possible for her egg to be fertlised, even if she ovulates up to five days later.

Work with your partner to figure out when her most fertile days are. Make sure you have lots of sex around that time, both several days before and up to 24 hours after the ovulation window. This will give you a better chance of conception.

Myth – all individual sperm are capable of fertilising an egg

A lot of people believe that sperm quality is binary – they’re either alive or dead. It’s the man’s job to put the sperm in the right place, and if pregnancy doesn’t occur, then there must be a problem with the woman’s body. It’s amazing how many people, both men and women, believe this. The truth can be a lot more complicated.

Not all individual sperm cells are equal. Some aren’t a good shape, some contain flawed genetic material, and some aren’t “alive”. For a man to be considered fertile, 40% of their sperm has to be alive, and of that 40%, not all of them are going to be of good quality. Aiming to improve sperm quality can help with conception.

Improve your sperm quality with diet, exercise, relaxation and better sleep. It may take around 3 months to see a measurable improvement, but it could really help tip the balance towards conception.

Myth – women’s fertility has a cut-off point, but men can father children until they are elderly

While it’s true that some much older men have managed to father children, the truth is that men’s sperm quality does decline with age. Men can have a hard time admitting that they might not be as virile as they were 30 years ago, and just because members of the Rolling Stones manage to father children well past their 50’s, it doesn’t mean that everybody can.

Unfortunately, this myth has resulted in infertility being the fault of the women, even if the man is past 40. While age makes it harder for women to conceive, it also significantly impacts men – yet it’s often women who undergo the fertility treatment. Just like women, an older age of conception can also raise the risk of birth defects and complications.

If you’re a man over 35 and it’s still not happening for you, get your sperm checked by your doctor. Even if it comes back fine, remember that you can still improve the overall quality of your sperm with lifestyle changes. Don’t fall for the myth that men are just as virile at 65 as they are at 25, and remember that older male celebrities may have used IVF or IUI to create a pregnancy.

This is partly true, and if you’re trying to conceive, then it’s best to avoid scalding your dangly bits for the foreseeable future. This includes hot laptops as well baths, as any kind of heat too near the scrotum can affect sperm quality and sperm motility, or even kill the sperm. The damage isn’t permanent however, and once the scrotum has returned to normal temperature the sperm replenishes itself.

There is still some debate surrounding the long-term effects of heat on sperm count, so it is best to keep cool by avoiding hot environments and wearing airy underwear like boxers.

It’s pretty annoying when people say this, particularly if you’ve been trying to conceive for a long time. However, there is a grain of truth in this. Although stress has been accepted as an everyday part of life, it can have negative effects on men’s fertility. Stress lowers men’s testosterone, which as a result inhibits sperm production. This doesn’t mean you’re not allowed to get annoyed in traffic jams, but it’s really worth looking at ways to reduce your stress level, if it’s regularly extreme.

Avoiding stressful situations and people is easier said than done, but it might help your sperm production. Many men avoid visiting their GP about stress, but it is important to tackle extreme stress and anxiety. Stress can also cause unhealthy behavior such as drinking, smoking and not eating properly, which also affects sperm health. Sports, cycling, meditation, yoga and mindfulness are all great places to start, if you’re looking for a healthy way to relieve stress.

Myth – sperm and semen are the same thing

Sperm cells are found in semen and are what get a woman pregnant. Semen is what carries the sperm, and what is released upon ejaculation.

While it’s not the end of the world if you mix these two words up, it could be a sign that you’re not as clued up about how your body works than you could be. Taking control of your fertility starts with knowledge. It may be worth taking some time to watch some Youtube videos or read a book or some scientific articles about your reproductive system.

There are a lot of myths and harmful stereotypes regarding penis size in society, however, penis size does not affect fertility provided the penis is able to ejaculate. It’s possible for a man to be hung like a racehorse, and have the ability to do it all night long, and still be firing 60% blanks. It’s impossible to rate fertility on appearance or performance alone.

It’s incredibly common for men to feel insecure about their size or performance, especially in the context of trying to get their partner pregnant. If you’re not feeling comfortable about these things, you might be avoiding sex or having difficulty feeling aroused, thus reducing your chances of conception.

Talk to your doctor and communicate with your partner. The worst thing you can do is bottle this up. Sex is supposed to be fun, even if there is a serious aspect to it as well, and communication can be a great confidence booster.